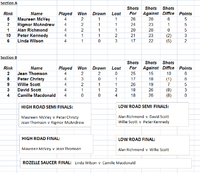 And so, now to the finals - and our first trophy winners of this season.

The High Road was an all-lady skip affair with Maureen McVey taking on Jean Thomson. Both had deservedly reached this point in proceedings having topped their sections in the pool games and being equally worthy winners in their semi final ties. The final proved to be an excellent contest. Whilst the opening 4 ends were fairly even a score of 4 shots to Jean in end 5 could have been decisive but Maureen bounced back immediately with a score of 3 shots to tie the game at 6 shots apiece as it entered the last end. It could not have been closer and but Jean left the ice with the bigger smile, a single shot gain in that end being just enough to emerge victorious by 7-6. Congratulations to both ladies for putting on a thrilling spectacle for the onlookers and especially to the winning rink of Jean, Alan McHarg, Jane Cherry and Jim Nelson. Commiserations to the very gallant losers, Maureen, Archie McGregor (deputising for Ken Gray), Dorothy Dawson and Alistair Tyre - very nearly but not quite!

The Low Road final saw Alan Richmond take on Willie Scott. The early ends went very much in Alan's favour but after end 4 Willie had managed to get his nose in front. A single to Alan in the next end brought the game closer at 6-5 still in favour of Willie but the 6th end proved decisive. An apparently stunning - or was it accidental! - shot from Willie's 3rd, Anne Carruthers, turned a closely contested end into a game-winner. A gain of 5 shots meant a lead for Willie of 11-5 and that was sufficient for Alan to shake hands and concede defeat. Well done to Willie, Anne, Harry Peters and Bella Kennedy. A gallant effort but to no avail by Alan, Shirley Scott, Bill Black and Jen Tyre (substituting for the travelling Rotarian Ronnie Wilson).

The third final of the evening was the Rozelle Saucer game featuring Linda Wilson and Camille Macdonald (the holder of this "prestigious" trophy!). There was little between the 2 rinks but after winning the opening end Linda always managed to keep ahead whilst for Camille there was the occasional opportunity to bring things level. However the loss of 3 shots in end 6 left Camille trailing by 7-2 and "enough was enough". Well done to Linda and her rink of Muir Austin, Allan Chapman and David Gray. Commiserations to Camille, Sheila Campbell, June Richmond and Alan McKinlay.