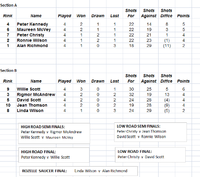 Well, that's it, the Knockout competition has been completed and we have our first trophy winners of this season.

The High Road saw the winners of their respective sections in competition, Peter Kennedy taking on Willie Scott. Just as with last year's finalists both had deservedly reached this point in proceedings having topped their sections in the pool games and being equally worthy winners in their semi final ties. In the final Willie got off to the strongest of starts and after 4 ends had opened up a lead of 8 shots. It would be a long road back for Peter who was somewhat surprised to be in the final given "how badly" he had been playing (his words!!). However a fight back did ensue and 2 ends later the gap had narrowed to 3 shots but unfortunately for Peter that was as close as he was going to get. A single shot to Willie in the final end brought a well deserved victory by 9-5. As Peter remarked his rink did improve as the game progressed but conceded they were outplayed by Willie. As the winning skip in last season's Low Road final Willie has now gone one better! Congratulations to everyone and especially to the winning rink of Willie, Alan McHarg (also in the winning rink last year!), Peter Reynolds (deputising for Harry Peters) and Archie McGregor (deputising for Alex Thomson). Commiserations to the very gallant losers, Peter, John MacLeod (deputising for Paul Williams) Dorothy Dawson (unfortunately a loser at this stage last year too) and Geoff Barber.

The Low Road final was contested by David Scott and Peter Christy. The early ends went very much in David's favour and after end 5 he had established a lead of 5-1. The cat was truly put among the pigeons however in the next end with Peter scoring 4 to bring matters level! Not to be outdone, although he must have wondered if he had lost his chance, David managed to get the decisive shot required in the last end and thereby emerge victorious by 6-5. In the end a close and exciting game with some good curling from both rinks. Well done to David, Scott McAndrew, Liz Tait and David Gray. A gallant effort but to no avail by Peter, Bill Aiken, Elma Stevenson and Ed Baines.

The third final of the evening was the Rozelle Saucer game featuring Linda Wilson (the holder of this "prestigious" trophy!) and Alan Richmond. Unfortunately due to a combination of circumstances no one from Alan's original rink was available but there were 4 more than able substitutes, Milly Beattie, Shirley Scott, Ken Gray and the evergreen Wallace Allan! Despite conceding a single at the first end there was no stopping Linda's rink on the evening Consistent play from each member was rewarded with a comfortable victory by 11-2 leaving everyone with the thought of "if only" in the section games! The watching Alan could only ponder whether things might have been different if he and his normal rink had been available. Well done to Linda and her rink of June Richmond, Bill Black and Alan McKinlay.

There was a good turnout of spectators which was encouraging and, not least, it was good to see Mike Williams amongst them casting his usual eye over everyone (for what purpose we always wondered!) and with his customary wit.