The Club's annual Pairs competition took place at Ayr Ice Rink on Wednesday 4th March 2020. The event was well supported with 8 pairs taking to the ice allowing a straight knockout format starting with quarter finals. The game format was slightly changed from previous years with the curlers delivering 4 stones at each of the 3 ends.

The usual courtesies prior to each game were amended somewhat due to the virus concerns with Willie Scott and Elma Stevenson bumping elbows rather than the customary handshake. The results from the quarter final games were as follows;

Three fairly close games and all having a lot of stones in play at each end with President David commenting that the overall standard of play was at a high level.

Willie and Elma continued where they left off from their previous game delivering some excellent stones. A missed take out by Allan in the final end allowed Willie and Elma to close out without losing a shot in their opening 2 games. The other semi between David & Peter v John & Scott was a tighter affair than the final score may have indicated with each end being in the balance until the final few stones.

After a quick bite to eat to keep the energy levels up the finalists returned to the ice.
Willie & Elma v David & Peter 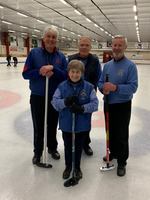 David & Peter scored a single at the first end to establish an early lead, but Willie & Elma responded with a double at the second to set up a tense final end. This end was in the balance until Elma delivered an excellent take out and lie on the button to narrowly beat one of Peter's stones. Try as he might David could not get at the shot stone due to guards thrown by Willie. So Elma and Willie ran out deserved winners with a 3-1 score line.

Congratulations then to the winners, Willie Scott and Elma Stevenson who finished off with a final bump of elbows and commiserations to David Gray and Peter Christy.